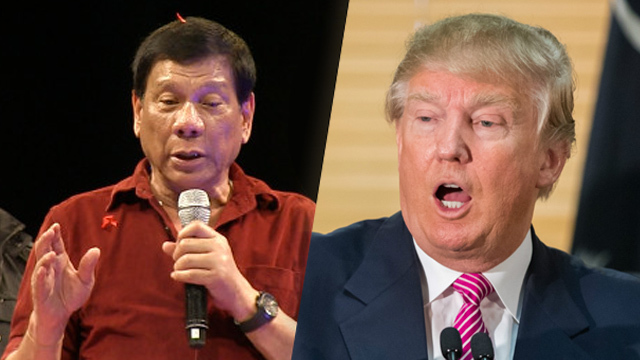 US President Elect Trump; Who Once Called Filipinos Animals, Invites Philippines President Duterte To The White House, Even After Duterte Threatens To Kick His Ass In Vegas.

US President Elect Donald Trump is seemingly the United States most-undiplomatic , divisive and least-honorable Presidents in history. After criticizing the Philippines President Rody Duterte on his EJK-style War On Drugs, then, calling Filipinos animals and terrorist -by accident in one of his speeches.

President Duterte, who is known globally for his verbal directness, called out Trump, and challenged him to a fist-fight face-to-face either in Manila or Las Vegas. In another rant, Duterte said, “…I have never met you…nor am I interested to.”

Then, the PH President ended with, “You’re a fake!” on Twitter after Trump lied on him, saving Duterte was his friend and loved him.

How times change, now, Trump in a 7-minute long conversation with Trump invited Duterte to The White House. Philippines Media expressed that the conversation was odd and humorous. Remember, this is also the PH President who called out The United States for their treatment of blacks in America. ( http://theamericanpressservice.com/philippines-president-duterte-black-america-see-police-shooting-blacks-americadead-thatappalling ) Now, Trump is a President known for his racism and non-inclusive character and ties to white supremacy. In addition, Trump has expressed his intent to swiftly evict millions of Filipinos now living in America and possibly require Muslims to have special concentration camp-style registration.

The US Media anticipates an interesting meeting in 2017.