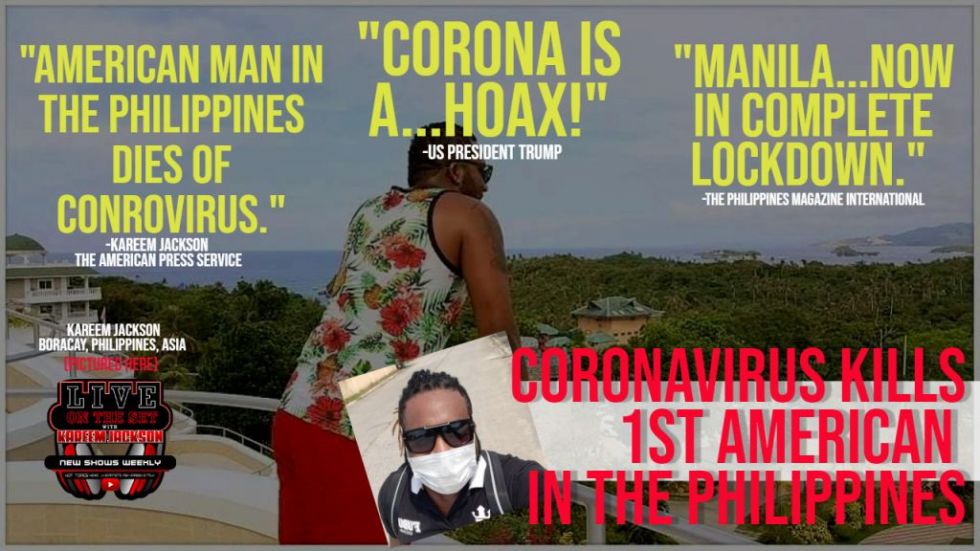 Corona Kills American Over The Weekend in the Philippines after US Pres. Trump claims “…Corona New Democrat Hoax…”

In the United States, President Donald Trump made a global false statement that sent a false sense of security to both American’s at home in the United States and to some of those living around the world.  As a sad result, 86-year old (not to be named), died of complications from the Corona Virus this past weekend in the intensive care unit of The Medical City, Pasig City, Philippines.  However, his home in Asia was in Marikina City, Manila, Philippines.

With nearly 100,000 worldwide Corona Virus Cases, the Philippines remains one of the safest places, as compared to Europe, Italy, Iran and South Korea, their swift precautionary measures by local government, as well as, business owners can be credited for the successful control.  *As of today; while this press article was being published, in the Philippines following a Presidential Address, the region with includes Manila has been put on total lockdown of public and private sectors.

While Americans in the United States; after the “…Corona Hoax” comment from President Trump, were seen still celebrating St. Patrick’s Day at bars, in-home, and street parties, the world has been on lockdown.  Additionally, countries such as the Philippines, and the continent of Africa have implemented soft border closures to Korea, China, Europe, The Middle East.

The American Press Service, believes, the American who died in the Philippines, was a Trump supporter, and followed the US Presidents statements, which were made before complete knowledge of the Corona Virus or COVID-19 was obtained; which later expressed the important fact that the expat community; those who travel globally/frequently, the elderly and sickly were at the highest risk, as others around them, may contract the virus and not be detectable nor even feel sick.   Proper, accurate and informed advice, which would have encouraged Americans abroad to not panic and travel home to the US in droves, congesting them on planes and in airports.  Advice which also would have forewarned elderly American nationals to take extra precautions, not travel to the hospital and to call their doctors.

In the case of 86-year old Patient #9, he had a travel history to the United States and South Korea.  But, had no (resent) travel history, nor exposure before not feeling well and later dying.  His symptoms started Sunday, 01 March 2020, he was confirmed to have the virus Sunday, 08 March 2020 and passed away this past Saturday 14 March 2020.

In addition, Patient #9 had a preexisting hypertension condition (or high blood pressure), diabetes, and chronic artery disease.  Patient #9 was confined to the intensive care unit of The Medical City, a world-class medical facility in Pasig City, Philippines.

“Patient 9 was an 86-year-old American male from Marikina City who died Saturday afternoon. He had a history of travel from the US and South Korea.”

Marikina City, Mayor Marcelino Teodoro, rushed into action; subsequently set-up a laboratory testing center in his city for the early detection of cases of the coronavirus (COVID-19), as well as a ‘community quarantine” which started Sunday, 15 March 2020, until Tuesday, 14 April 2020.  Also initiating a city-wide ‘disinfecting’ campaign of the city road, walkways and structures, in which hazmat-style medical assistants can be seen walking the city spraying an antibacterial solution. Mayor Teodoro’s rapid response may have saved the lives of many other Filipino and expats alike throughout the sprawling city.

Sadly, up to six others connected to the American national also became ill and tested positive for the virus.  Specifically:

“We are all in this together.  We are one family here, and when it comes to crisis like these…unlike my small-minded US President Trump, who builds walls and blames others, based on race, social status and religion.  I am so embarrassed for us.  Here, abroad we help one another, the loss of (Patient #9), is a loss for us all.  And, the Filipinos took such wonderful, loving care of their American guest.  We thank Mayor Teodoro and other leaders like him here, for not casting blame, or being racist in any way, but for protecting us all in this crisis.”  -Kareem Jackson, US Media, in the Philippines

Medical Note:  Coronavirus (COVID-19) is spread through small droplets from the nose or mouth when people infected with the virus cough or sneeze.  Those without symptoms, such as the youth under 14-years old, can also spread the virus without knowing it.

Prevent infection.  Practice regular hand washing, wear a face mask, stay in the home as much as possible, and cover the mouth and nose when coughing and sneezing, and avoid close contact with those who show respiratory symptoms.

Commonly reported Coronavirus (COVID-19) symptoms are fever, dry cough and shortness of breath. Those with severe and critical symptoms (if in the Philippines) should call the Health Department at (02) 8-651-7800 local 1149-1150.