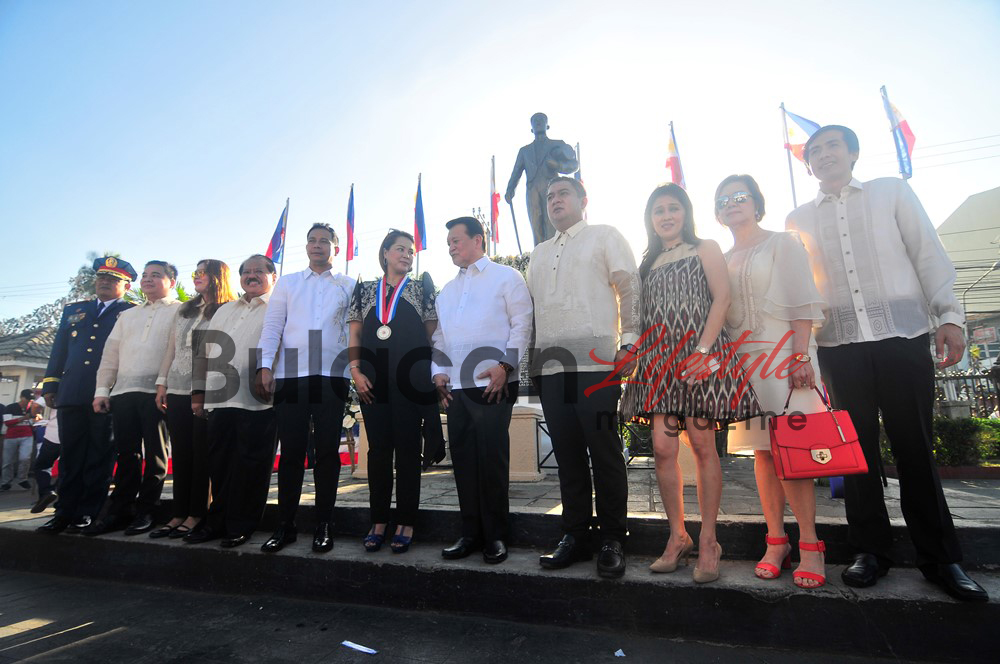 The majority of people around the world today, have no idea about the massive historical significance of Barasoain Church, Malolos City, and The Bulacan Province in the Philippine Islands.
However, thanks to Honorable Malolos City Mayor Atty. Christian D. Natividad, with Armand Sta. Ana, Director, Malolos City Department of Tourism, local historical societies and US media,
that’s all going to change.

Did you know? The first democratic constitution in all of Asia and Africa was founded here in your city of Malolos, Philippines at the historic Barasoain Church.

Did you know? The revolution is in the name. “Vamos a Malolos: Live History. Make History.” The official Malolos City slogan, describes the Malolos City pride exactly. Officially, Barasoain Church is “Our Lady of Mount Carmel Parish” however, “Barasoain” was derived from Barásoain in Navarre, Spain to which the missionaries found the place in Malolos in striking similarity. When the Filipino revolution broke out, the Spanish authorities coined the term “baras ng suwail,” which means “dungeon of the defiant” because the church was a meeting place for anti-Spanish and anti-colonial illustrados.

The National Historical Commission of the Philippines has declared the City of Malolos as one of the History Centers in the Philippines. Malolos City played a very significant role during the 1896 Philippine Revolution; resulting in the declaration of Philippine Independence in Kawit, Cavite which later was ratified in the first national convention called Malolos Congress.

Consequently, the First Philippine Republic was founded on the 23rd day of January in 1899 at the Barasoain Church in Malolos City, Bulacan. For Filipinos, the latter is the most important part in our search for our unique –yet, sometimes forgotten- identity, since it has ratified a proclamation translating the PRIDE of the so-called “Indio” as the freedom-loving FILIPINO CITIZEN of the Republic of the Philippines. For the world, it was deemed “The Cradle of Democracy” and symbolized the very first beacon of democracy throughout the East.

However, many Filipinos have yet to see the relevance and true-meaning of January 23, 1899 -the date of the founding of the First Philippine Republic.

Sadly, even the local people of Malolos City have forgotten the global-significance of this historic day. The impact it made for democracy around the world, and thus, the freedoms and lifestyles we all now freely enjoy today.

Which is the reason, the City Government of Malolos under the leadership of Honorable City Mayor Atty. Christian D. Natividad, upon his assumption to Office in 2010, founded the ultimate Malolos City Historical Pride event: FIESTA REPUBLICA.
FIESTA REPUBLICA’s Mission…

…is to empower and arouse the consciousness of the Filipino people and to bring both domestic, as well as, global-awareness to the historic significance of Barasoain Church, Malolos City and January 23rd, 1899.

The founding location and date of the First Philippine Republic;
The Malolos Republic.

Which is the first democratic constitution in the East; throughout the continents of Asia and Africa.

FIESTA REPUBLICA is a celebration of Philippine democracy, a festival of Filipino history, arts and culture in the Renaissance City of Malolos. It started as a cultural and tourism program in 2011 involving the local schools and barangay neighborhoods, cultural groups and artists of the city to commemorate and pay tribute to the gallantry and wisdom of our ancestors.

Commencing on January 17th to the 23rd of every year, Fiesta Republica is a week-long festival-style event which features various social, historical and cultural events, culminating in a commemorative celebration of the 120-year anniversary of the First Philippine Republic.

The major highlight of the celebration is DULANSANGAN, a street dance-drama festival showcasing the different historical events prior to the proclamation of Philippine Republic in 1899, therefore educating the people of the community on the wisdom and bravery of our ancestors.

In January of 2013, Fiesta Republica was promoted as a national event. The socio-cultural value of the activity is something which; not only the local people of Malolos should enjoy, but for the entire nation to observe and celebrate. Thus, the city decided to promote it on a national scale to inspire more people and consequently advocate the significance of the 23rd day of January as a National Celebration of the birth of Filipino Democracy. Hence, through the city’s initiative, a Presidential Proclamation No. 533 dated January 09, 2013 and thru the Republic Act No 11014 dated April 05, 2018 DECLARING JANUARY 23 OF EVERY YEAR AS “ARAW NG REPUBLIKANG FILIPINO 1899” to be a Special Working Holiday nationwide.

Indeed, Fiesta Republica has truly become a Festival of Philippine History, a Celebration of Filipino Democracy and The First Beacon of Democracy throughout the East.

This year, Fiesta Republica has taken the international stage. As all eyes are on Bulacan, Malolos City Mayor Natividad, along with Malolos City Tourism Director, Armand Sta. Ana have teamed up with US Media, the US Executive Publisher of The Philippines Magazine International and the all-new Bulacan Lifestyle Limited Special Edition Magazine to expand awareness globally.

COMMUNITY IMPACT. Since its 2011 inception, the Fiesta Republica celebration has gained a lot of positive reviews, coming not only from the local people but also from the different provinces and cities that have participated in the festival.

Though still very young, the event has already reached both national and international acclaim. The inherent value of Fiesta Republica is not merely national and global media exposure, but education, cultural pride and historical significance.

In essence, Fiesta Republica has progressively become a national event which will soon be a democratic pride occasion triumphantly exalted by every Filipino and throughout the democratic world.

Pride of Place. Throughout the City of Malolos, one will see the evolution in the cultural make-up of its people which is reflected in their daily lives. In social media for example, especially on Facebook and other platforms, Maloleños instill great pride in being from and/or living in Malolos City. Especially when one speaks of patriotism or a showcase of culture and excellence, Malolos pride is paramount. Old and young people alike have notably publicized their humble beginnings and proud history.

Fiesta Republica is a unified effort, in which everyone is actively involved. To date, the city boasts of more than a thousand artists, cultural workers, as well as, volunteers and reaches over 1 million people throughout Malolos City, Bulacan and around the world.

God-loving & Patriotic Leaders. The founding of the First Philippine Republic happened inside the Barasoain Church while the Malolos Cathedral was used as a Presidential residence during the Republic. Both churches were witnesses to the gallantry and wisdom of the Filipino revolutionaries.

In addition, one of the highlights of the festival was the Pista ni Sto Nino which provides the religious aspect of the event. These variables showcase the spiritual and patriotic impact within the community. This characteristic of the Maloleños is being recognized in the Gawad Bayani at Bituin ng Malolos, the highest award giving body which pays tribute and honors our modern-day heroes and artists in the Malolos City.

REPUBLIC DAY: A National Filipino Holiday. We can now proudly say that one of the most-remarkable achievements of Fiesta Republica is the issuance of the Presidential Proclamation No. 533 dated January 09, 2013 and Republic Act No 11014 dated April 05, 2018, which declared the date as Araw ng Republikang Filipino 1899 as a Working Holiday countrywide. Though short of what we really intend to realize, such declaration is a milestone achievement, and a big leap-forward towards our unified goal of attaining National Non-Working Holiday status, for Republic Day.

Such a title is a key advantage for Malolos City branding and tourism success. Ironically, although Malolos City, as well as the Historic Barasoain Church is a regular tour destination, and part of the tour itinerary in Lakbay-Aral, which most schools and colleges in the country patronize, the local people especially the youth lack knowledge as to why.

Since the beginning of Fiesta Republica in 2011, we have continued to promote Malolos City as a Historical and Cultural Tour Destination through our Lakbay-Kasaysayan for local Elementary School, Grade 6 students throughout the city.

Annually, we provide historical education and knowledge to our youth on their local heritage and modern history. Thus, instilling pride and continuously reminding our youth of the heroism and patriotism of our ancestors who set a precedent throughout the East.

Building & Maintaining Momentum. Over the long term, we must build and maintain our momentum. We continually seek support and subsequent endorsements from The Association of Tourism Officers of the Philippines (ATOP) to aide in the regional promotion of Fiesta Republica and consequently to be of assistance in raising awareness in regards to the historical relevance of Jan 23, Republic Day.

In addition, continued lobbying efforts in both The Congress and The Senate to declare Republic Day as a National Non-Working Holiday. As well as, the inclusion of Philippines Local History in The Department of Education (Dep-Ed) Curriculum to further educate the next generation on the importance of Philippine Culture and History in the total human development process especially in these times of globalization and information technology.

ISKULIMPIKS: Paligsahan sa Kolehiyo at Pamantasan
A youth educational competition designed to encourage them to enjoy learning history and heritage amidst the prevailing
“gaming” and “mall” culture and globalization syndrome

Konsiyerto Makabagong Musika
A musical tribute to the young heroes of the nation
emulating the wisdom and valor of our ancestors.

CINE REPUBLICA 2018
A short-film festival competition in the City of Malolos which encourages young film artists to create new, as well as, original works showcasing the Filipino culture and history through the contemporary sensibilities of the millennial people.

GAWAD BAYANI AT BITUIN NG MALOLOS
The highest award-giving ceremony of the City of Malolos honoring outstanding Malolenyos in the different fields of professions in the local, national and international scenes.

MALOLOS BIKE FESTIVAL
A national bike festival for all ages of cyclists and bike enthusiasts, encouraging them to come together to also celebrate Republic Day and to promote sports tourism in the city.

National
TIMPALAK AWIT-MAKABAYAN
A national choral competition open to all schools and community-based choral groups in the country, promoting nationalistic songs of the century.

G AT BB REPUBLICA DE FILIPINAS
A national beauty pageant enjoined by different provinces and cities from all over the country to further advocate on the significance
of the 1st Philippine Republic.

PASIKLABAN NG MGA BANDA
A national brass band parade competition to commemorate the historic parade of the Republic that was introduced by Gen. Emilio Aguinaldo during the annual celebrations held after 1899.

ARAW NG REPUBLIKANG FILIPINO 1899
An annual commemorative event in which we honor the
gallantry and wisdom of the framers of the Republic.

DULANSANGAN
A street dance-drama competition between local, provincial and national troops from the different regions throughout the country,
promoting local history among the students and academe.

PISTA NI STO NINO
An annual celebration of the Feast of Sto Nino happening on the last Sunday of January to pay homage and devotion to Infant Jesus, the Patron Saint of Barangay Sto Nino. Hundreds of devotees from all over the country witness and participate in this religious tradition of pageantry.