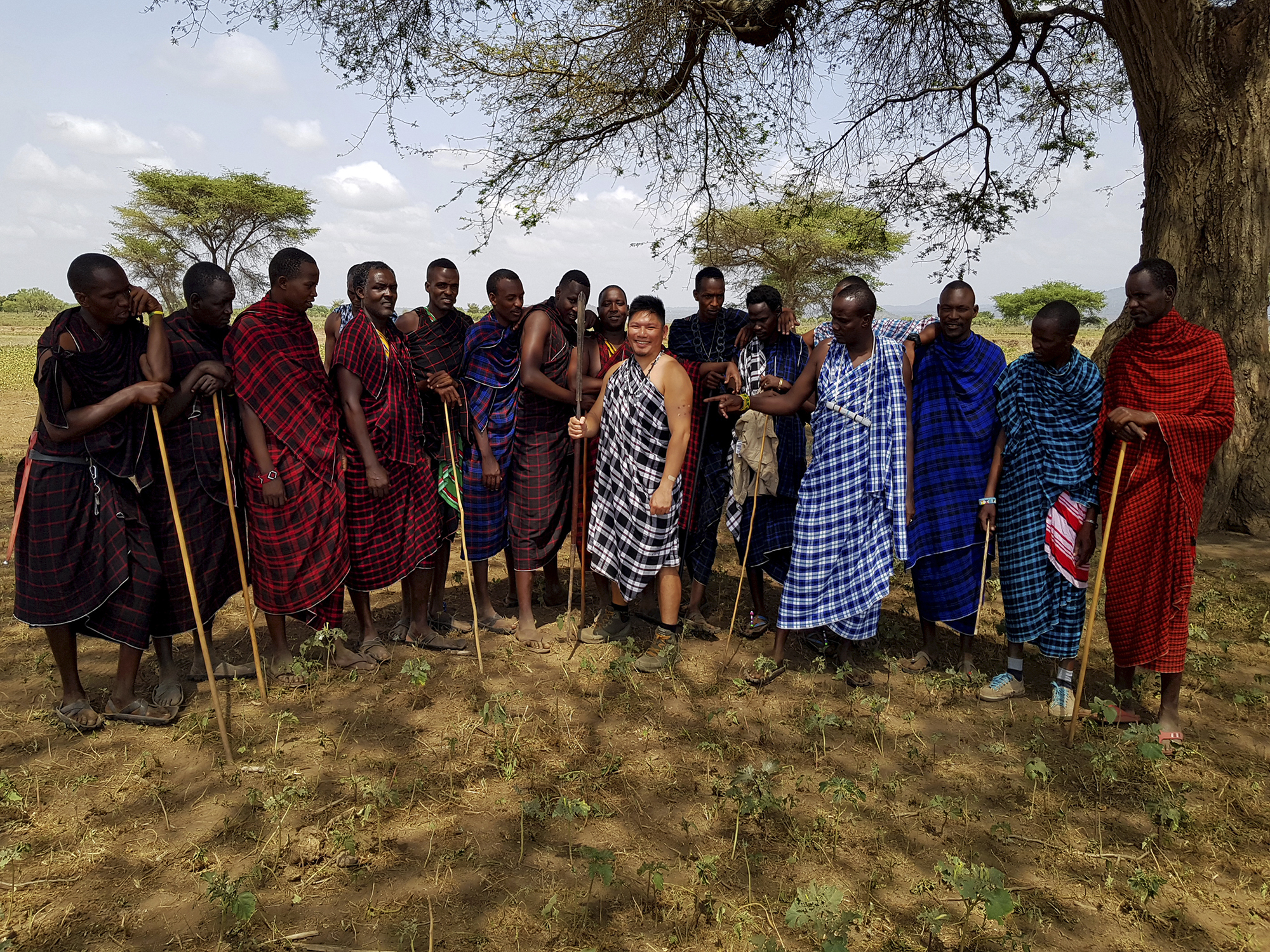 After journeying halfway across the world, I’m finally face-to-face with the Maasai warriors who will initiate me.

It’s a blistering morning in the village of Arusha in Tanzania and we’re preparing for an ancient ritual usually reserved for the men of the Maasai tribe.

I’m an anthropological journalist from the Philippines, an archipelago with 134 tribes. The African continent, over a hundred times larger, hosts 3000 tribes. I’ve visited many Filipino tribes, from the Taw’buid to the Badjao. Not content with merely recording their culture with words and photos, I sometimes ask if I can undergo traditional rituals. They occasionally agree.

The Maasai have for generations, practiced a unique tribal scarification process. Today, the Maasai will burn my flesh with a stick dipped in a traditional disinfectant: cow dung.

The Maasai are possibly Africa’s most famous tribe. They’re known for three things: drinking fresh cow’s blood, hunting lions with spears and their famous adumu jumping dance, where tall men can jump half a person’s height to win honor and (if they jump really, really high), a wife.

It is believed that the Maasai migrated from North Africa in the 15th century by following the Nile River. They speak a Nilotic language called Maa and believe their God Engai gifted them with all the world’s cattle. For centuries, it was the custom of Maasai to raid and ‘reclaim’ the herds of outsiders by force. Their ferocity was legendary.

Modern Maasai now tote cellphones, habitually watch funny Youtube videos, and ply the savannah on screaming motorbikes called tuku-tuku. Once or twice weekly, hundreds of them gather in an open field which becomes a bustling Maasai market, where livestock and other goods change hands.

Two million Maasai belonging to 22 clans roam Maasailand, a territory which bisects Kenya and Tanzania. They’re never far away from their herds of cattle, goats and sheep, which are rarely slaughtered. The animals are kept primarily for milk, blood and status. The more animals and children a herder has, the richer he is. Wealthy tribesmen can have thousands of cattle and more than a few children.

To become a warrior the old-school way (and once again to impress a potential wife), young Maasai needed to stalk and kill a lion in a ceremony called the alamaiyo. This practice is now done only in retaliation, when rogue lions pick off cattle.

Their famed adumu or jumping dance was originally part of the eunoto, a weeklong ceremony to transform young men into warriors. Now mostly done for tourists, the fascinating dance is accompanied by the low buzzing drone of throat singing. Of all the aspects of Maasai culture though, I most admired their chale or ritual scars.

Tribal scarification has been practiced for thousands of years, particularly by dark-skinned cultures where black tattoos are hard to notice. Scars take the form of burns, cuts or gouges rubbed with saliva, acid, ash, gunpowder and other fun substances to add shade and height.

Though occasionally done for beauty, scarification is usually a rite of passage into adulthood or various tribal subgroups. Maasai moran undergoing scarification must exhibit bravery, strength and indifference to pain – crucial traits in battle.

Almost all the Maasai I’ve met bore these strange but fascinating marks. I wanted to find out if I can endure one of their initiations.

This is gonna hurt.

The first mark sizzles like a tiny star. The pain passes. I look at my arm. There’s a hole in it. And it smells like barbeque.

Emmanuel confers with the others before readying the red-hot stick for another poke. There will be six in all.

Years of martial arts training pay off as I lift my mind to another place.

Slaps on the back and cheers snap me back to reality. The ceremony is done: like  the proud tribesmen surrounding me, I now bore the marks of a moran.

“Ashe oleng,” I say as we gratefully bid the legendary warriors farewell. Thank you very much.

As we leave the village, they raise their spears and herding sticks in reply.

I have visited many tribes, but one will always stand out each time I look at my arm. (ENDS)

Glass beadwork is a hallmark of Maasai jewelry. Each color denotes a trait. For this bracelet, orange, black and white symbolizes friendship, unity and good health. Visitors to Maasai communities should always prepare a little extra cash to support local crafts. (Gregg Yan)

Smiles outshine jewelry worn by Maasai mamas near the Serengeti national park in Tanzania. Most Maasai women keep their heads closely shaved. Like moran, mamas sport distinctive scars, such as these half-moon and lion claw marks on their cheeks. (Gregg Yan)

Africa’s Great Rift Valley can be seen from space. The rift begins in the Dead Sea and splits a colossal portion of Africa through Ethiopia, Kenya and Tanzania before ending at the Indian Ocean. Maasailand bisects Kenya and Tanzania and sees two distinct seasons, each lasting roughly six months. Alari or the rainy season starts around November while alamei or the dry season begins in May. The Maasai’s way of life has long been dictated by the weather. (Google Earth)

Enkaji or traditional homes are made of branches, mud and cow dung. They are surprisingly cool and comfortable inside, though most smell like sour milk, owing to the Maasai’s love for mtindi or homemade yoghurt. (Gregg Yan)

Katambuga are durable sandals hewn from used truck tires.  The Maasai are a practical and creative people. (Gregg Yan)

Livestock forms the heart of Maasai society. Tough zebu cattle like these are led to pasture each morning, then corralled at night for safety against predators and the occasional sneaky rustler. “Each of these cattle is worth about USD250. Their owners give them distinctive scars to deter theft,” explained herder Yacobo Laiza. (Gregg Yan)

Goats and sheep also bulk up the tribal herd. “Goats are worth about USD100 each, while sheep go for USD75 because they have oily meat,” said herder Frank Komesha. Malula boma, where I underwent the moran’s ceremony, had a sizeable goat corral at a tribe’s its center, full of aromatic little green goat-cannonballs. (Gregg Yan)

Chale marks are just one of many variations of tribal scars, each with a different meaning. Watch the scarification ritual here. The marks take around a year to heal fully. (Gregg Yan)

On the lookout for lions, spear-armed Maasai warriors guard their cattle at the boma or village of Malula in Tanzania, East Africa. To plan a visit to a Maasai village, contact Rupia Adventure on social media. (Gregg Yan)